Here is a small example:

(Please note that in contrast to the pre-conditions, post-conditions may refer to the closed state. This is due to the fact that the class client should not be able to check the validity of the post-condition; this is a concern of the method itself, and of the tools, such as Code Contracts, which insert condition checks at each point of exit from a method.)

This can be done as follows: 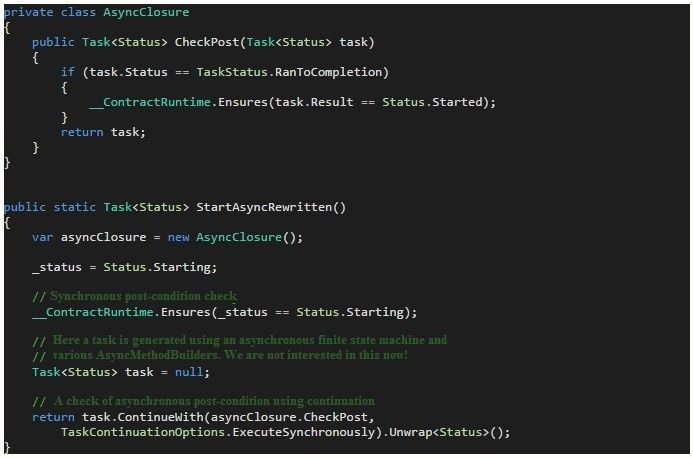 In the case of asynchronous post-conditions, ccrewrite generates a closure (AsyncClosure class), with the only CheckPost method which is intended to check the status on task completion. (Yes, in the case of "exceptional" post-conditions, i.e. post-conditions that must be fulfilled in the generation by exception, a very similar code is generated, but the check is performed only if the task is completed with errors).

The idea behind it is that a post-condition is checked in the continuation which is defined by ContinueWith at the task, initially returned from the current method. ContinueWith in this case, in fact, decorates the original task and returns the same result, but with the generation of an exception in the case of a violation of the post-condition. Since CheckPost method returns a Task<Status>, the returned value of the method ContinueWith will be Task<Task<Status>>. This means we need to use a trick from the method TaskExtensions.Unwrap and unwrap the resulting value to obtain a simple Task<Status>.

Now, if the post-condition is violated, the client will receive a ContractException, and if not, it will receive the original task obtained as a result of the work of an asynchronous method.

Asynchronous post-conditions do not have special syntax in the Code Contracts library. To use them, you need to refer to the Result property of a returned task in a post-condition, or just use Contract.Result<T>() if the method returns a Task <T>. Knowing this, you can create a small helper method that will express the intentions more clearly, which can be useful when an asynchronous post-condition must check a state of the object without touching the returned task:

NOTE
Yes, it is absolutely impossible to express an asynchronous post-condition if the method returns a Task!