Reactive Programming in Java: How, Why, and Is It Worth Doing? CompletableFuture Brings us to the Async World

The last article in our Reactive Programming series. This time we look at how CompletableFuture Brings us to the Async World.

CompletableFuture Brings us to the Async World

Let’s look at a simple example.

In the code, CompletableFuture methods from a standard JDK are marked orange. 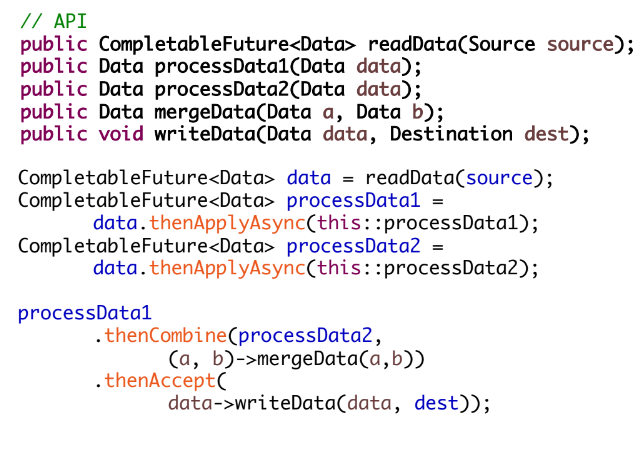 Suppose we have an API that allows us to:

This is a typical task – read data, process it in two threads, then merge the processing results and write somewhere.

We have read the data:

Then say: once data is read, it should be sent to processing:

It means you should start their processing in a separate thread. As we use an Async postfix here, the processing starts in two different threads:

The functions this::processData1 and this::processData2 will be started in two different threads and executed in parallel. Yet after the parallel execution, their results should be merged. This is done by thenCombine.

Here we started two execution threads, and once they were completed, we combined them. thenCombine works like this: it waits for processData1 and processData2 to complete, and then calls the function to combine data:

So we combine the results of the first and second processing and then write data:


Here we get a chain that is actually a business process. It’s as if we are saying: “Kathy, take data from the archive and give it to Helen and George for processing. When Helen and George bring the results, pass them to Veronica to combine them and then pass it to Victor to write a report based on that data.”

We have no definite schedule here, about which we spoke earlier: there is a possibility to pass data as soon as we can. The only thing that is waiting is thenCombine. It waits for both processes (the results of which it combines) to complete.

CompletableFuture is a cool approach indeed, which helps us build asynchronous systems.


In a future article we will be looking at high-level approach to asynchronous operations and review reactive programming operators.