What I want to emphasize before digging deeper is the fact that in order to use tools and techniques from psychology, one must first understand oneself and sort oneself out. As Jordan B. Peterson says, set you house in perfect order before criticizing the world. This will probably require a lot of work and will take time, but it is a necessary precondition to successfully using these tools. 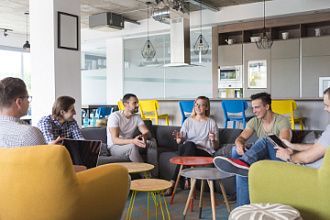 We know that one of the possible sources of resistance to change are some unconscious reactions. But how we can deal with them? And, to be more precise, how we can make sense of the source of that resistance, so that we could address it more specifically?

In this post I want do discuss some of the tools of Cognitive Behavioral Therapy (CBT). Let’s start with some basics of CBT.

The core concept of CBT is a cognitive model. According to that model a person’s reaction (emotional, behavioral and physical) to a given situation is not a product of that situation as is. Rather the reaction is based on some automatic thoughts that a person has in a given situation.

Let’s consider an example. When an Agile coach proposes using Kanban to visualize and manage workflow, there might be different reactions:

In the latter case, Developer C is not necesarilly an underperformer — he could possibly be a top performer in the team, but his perception is that he does less than he should do. That is quite a common case that is called “the impostor syndrome”. So we have the same situation, but different reactions.

It could be the case that one automatic thought or emotional or physical reaction triggers another automatic thought, creating a cascade of cognitive processes and reactions. For our purposes we will use this simplified model.

By understanding a cognitive model, one can analyze a person’s cognitions and work towards changing those parts of the cognitive model that are dysfunctional. People are often unaware of their core and intermediate beliefs, while they might know some of their automatic thought s— it depends on the situation and a person’s self-awareness. The key point here is that these thoughts are usually taken by a person without any doubts.

In CBT a therapist can help both in conceptualizing that model and in finding ways to improve that model by changing dysfunctional cognitions to more functional or at least neutral ones.

An Agile coach might also use this cognitive model to help a person accept changes. In the example above a coach might help the developer to discover that he is actually a top performer, and by visualizing his work he could help himself (and other team members) see his actual impact on the team’s performance. But how might a coach learn how a particular person’s cognitive model works? Here comes the Cognitive Conceptualization Diagram (CCD). The answer in the second part of our article.

Interested in working on your Agile skills? Check out our trainings on the subject.